For the last 30 days, I’ve been on a rather strict diet. Well, not on a diet so much as doing a nutrition challenge. Coach Tommy, the owner of my gym (Crossfit Immortal, woop woop!) organized it. I’m not usually one for “diets”, but since I have consumed the proverbial Crossfit kool-aid, I’m apparently down for anything now!

The challenge was a points-based contest based on the nutrition rules of the Whole Life Challenge, which you can read about here. But, Tommy decided to make it more strict. Because it’s only 30 days. And because he’s mean, he’s just mean. (j/k TC.)

So for 30 days JR and I have been off gluten (all forms of wheat, barley, and rye), dairy (except plain yogurt), corn, soy, white potatoes, white rice, processed oils (canola, soybean, etc.), added sugar (including all-natural sweeteners like agave, maple syrup, and honey), and alcohol. Participants lost points for cheating and earned bonus points for working out at the gym.

And it was a challenge indeed, even for a health-conscious eater like me. First off, it was time-consuming. I scoured the web for ideas and new recipes. I spent more time than usual meticulously planning our meals and with almost no packaged foods allowed on our menu, I spent many hours prepping food. I struggled (and cheated) when I baked chocolate cookies and birthday cupcakes for the kids. There were times, for instance after doing 60 snatches and a boatload of slam balls, when I felt like I would lose my mind if I didn’t have a big bowl of pasta. (I didn’t.) And one time I was rude to a bartender when he told me that they had no hot tea. Yes, I *may* have been a hangry b**ch from time to time. But, on the flip side, I also felt full of energy, my workouts seemed super-charged, my sometimes-plagued digestive tract was happy, and my body fat is now 2.5% lower! Not too shabby!

The final contest results are not in yet – weight and body fat will be compared to pre-challenge measurements and these changes will be factored in with the points to determine the grand prize winner. I know from the online tracking sheet that though I had a strong finish, I did not score the most points, so I don’t have much of a chance of winning.

Cash prize or not, I’m glad I did it, because as I ease back into “normal” life I’m taking a few improved habits with me as a result of some key realizations:

I was grateful to have my partner-in-eating JR doing this too. For him, the biggest challenge was switching from our typical starches like pasta, potatoes, and tortillas to a more limited list of options like quinoa, oats and buckwheat. It wasn’t easy, but it has forced both of us to change the proportions of our meals and snacks – more veggies and protein, with more moderate amounts of starch – which is probably better for us in the long-run.

Check out my Pinterest board for some of the new recipes we tried during this month. Many of these will remain in regular rotation here at Camp Sunnyside and I encourage you to incorporate them into your family’s menu. But not the unsweetened granola. Nobody should have to eat that $hit.

Posted in mouths to feed. Bookmark the permalink.

Wednesday marks 12 weeks of living at Camp Sunnyside, kitchenless. It has not always been easy, but I think that anyone who knows me would agree that my attitude has been pretty good. I’ve joked about our rustic existence, laughing my way up and down these darned stairs in order to use a sink. I’ve felt thoroughly blessed by the generosity and kindness of my friends, who have lifted so many burdens from me these last few months. It really has been fine. Happy, even. And people survive far worse, of course. But despite the fact that the end is now in sight, I’m feeling quite cranky today.

There’s no reason for the change in mood…The installation of my kitchen started last week and it’s coming along nicely.  There’s visible progress every day and it’s fun to see it all coming together. I think I’m just tired. I want a normal life back. And I have a feeling that the final few weeks are going to be the hardest yet. 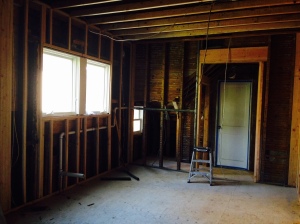 So, to prevent myself from spiraling into a really rotten attitude, I’m daydreaming today of the stuff I’ll do when I have a kitchen back. Here’s my new-kitchen bucket list:

1. Marinate something myself (as opposed to relying on Fresh Direct chefs to do this for me). An extra dirty dish will be nothing to me!

5. USE NO MORE PAPER PRODUCTS.  Earth, forgive us for what we’ve done.

6. Make my own coffee. The McDs drive-thru ladies will miss us.

7. Put my electric frying pan into storage. I don’t ever want to see that thing again.

8. Drink water out of a glass. Like a person.

9. Pack lunches instead of coercing the kids to buy again. (“No honey, I think you like the meatball sub!”)

10. Have friends over for a meal. This place won’t really be a home until we share it with the people we love. JR says maybe we can host Thanksgiving 2015… but in the spirit of keeping my chin up, I’m inviting people for New Year’s Eve. 🙂

Posted in mouths to feed, reno survival. Bookmark the permalink.

Through a haze of sawdust I have stumbled back to my blog. (Though I think since it’s been 7 months since I posted here this no longer qualifies as a blog. It’s more like an annual report.)

A few days after my last post, JR and I bought a lovely home, located on a charming street aptly called Sunnyside. In June we broke ground on an addition and kitchen renovation. In July we moved in.  So here I am, sitting in a kitchenless (and until last week, laundryless) dream-home-to-be. 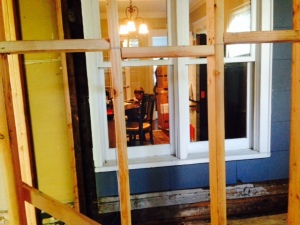 A view from the construction zone.

We’ve been here at Camp Sunnyside (JR’s affectionate name for our rustic half-constructed abode) for about 8 weeks. And these 8 weeks have really tested my healthy meal planning and organizational skills. And my sanity. Here’s a snapshot:

Anyhoo… with this labor-intensive Little House on the Prairie lifestyle that we’ve got going here blogging is not really on my short list of to-dos. But I do feel like I’m figuring out some great one-pot meals, kitchen short-cuts, and other tricks that I’d like to share (and remember for when I get my real life back). So I’m going to Tweet and Instagram what I cook for dinner and any other ideas or observations worth sharing.  Follow me! Twitter handle: @RDAmy. Instagram: @freshsqueezedmom.